Your job is to pass out rations in a war-torn country, with hardly enough to go around. You must tell the survivors "you only get one".

Who do you decide to feed? Do you want the soldiers to stay alive to protect the common folk? Do you save the women and children, the aged, the unemployed? Will you take bribes, or succumb to violence?

Their fates are in your hands.

Initially created in 72 hours for Ludum Dare 28. The theme was "You Only Get One". We placed:

Instructions
Click the ration to hand it to the current survivor in line, click the X card to deny a ration, or click the gun to eliminate.

I think there should be a "be attentive" option for e.g. when a young child you know has stolen before shows up (so if they try to steal again, you catch them and take back what they've stolen, so they'll be less likely to try again).

I survived with 3 people

I won with 1 person XD

i wonder what happens if i kill everyone...

Failed at day 11 first try, but second try I won with only having 4 people left. This is a good game.

Really nice game, only problem is that, while at the beginning you try to help everyone and feel bad when people die, you soon enough stop caring and simply feed those that really need it, and shoot those that complain.

lol same that's what i do everytime... except for the fact that i try to help everyone... i shoot everyone until there's no one left and only survive 2 days.

i killed all the kids

the funny thing is, all they do is eat, so it's usefull to kill all the unemployyed and kids first

Needs a way to deal with illness.  I had a good groove with 7 left including 3 farmers, but illness whittled me down to just 3 survivors.  Much sad.

this reminds me quite a bit of papers pleas

I don’t know what is going on.

I found that the best strategy is to kill everyone in line at first and give rations to whoever is left. It's better than 0 and 1

Very profound and thought provoking. Poses interesting ethical questions. Got a bit repetitive when most of the pop died on my first playthrough, though. Overall, a great game.

unemployed, student, and children- don't appear to do much

It seems that the elderly are more likely to die of illness. other than that there doesn't appear to be any other significance

if they mumble, mutter, yell, demand, or threaten- either credits or rations will be stolen

If they state they're hungry, starving, or "can't go on much longer"- they will most likely die due to starvation

with the death of flash theres so many games i'll never get to play :(

i killed all then made a child stave for 25 days

I've implemented a new strategy:  Kill all but 1.  Give the 1 the ration for the next 25 days.

Edit:  To prevent guilt don't even look at them.  Just press the gun button.

Edit:  Make sure they don't die though.

I shot everyone except for a farmer,(P.S. All young people, but no children.) a merchant, a worker, and a soilderl.

They can also die of illness... don't keep people who are older alive, they get illness quickly, and the children should die too.

You know, now that I read this, it sounds really messed up '-w-

Survived with 4 people and 82 rations

i shot everyone as if i were in a school

Reply
A PersonItch.ioBrowserMan267 days ago(+2)

I love this game...i just wish there was a downloadable version.

this game is so easy. you just kill everyone and hoard the rations for yourself

9/10 has a little something for everyone

exactly what i did

Hey there! Nice game! I'm in <3 with the graphics!

I have this weird glitch where when i try to start a new game it just continues from day 26 and so on and it says (no one came in line today) and then ends the day.

just delete the tab and reopen

I like this game. Was it inspired by Papers, Please?

I killed everyone except one guy and I gave him all the rations and I survived :D

I made it with two people, Randy the child and Lorene the farmer, but the game says the population was 1. Also, trying to replay just continues on from the end of the game. Might want to consider fixing that.

Made it with 5 people. Great game.

i survived with 15 people

you should have shot him 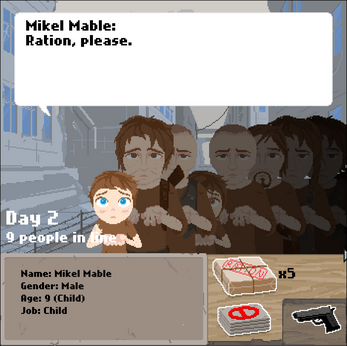