Your browser does not support the Unity Web Player. Want to save the game for later? Add it to a collection.

You are a sea serpent wreaking havok on this watery world. Created in 72 hours for Ludum Dare 33 Jam. The theme was You Are The Monster. We ended up placing:

Instructions
Use the mouse to navigate the seas. Eat people to increase your length and total health, but if they see you above the water, they fight back and bring bigger boats and more deadly weapons! Eat more fish and people to heal, but they do take some time to digest...

I wonder if this game will ever be revisited

i have a few suggestions

sharks to fight and get points from in the water, having slower speed and a boost button, being able to bite wooden boats in half, and small upgrades if you level up enough(like previous suggestion or not being hurt by slow sinking harpoons.)

still great, the story could even be a movie lol

hang on you can change colour? only just realised. Look at the thumbnail before you go onto this page

Reply
Username or email4 years ago(+1)

Upbeat music, pleasing graphics, engaging mechanics. It's very easy to like this game on a technical scale, but the game is just so unique and entertaining from an artistic angle. It's hard to explain exactly why it's so much fun!

I feel like there should be a charge or boost button to leap out of the water.

At the moment I struggle to get on top of the boats to eat the people since once you leave the water you have almost no air making the controls feel very stiff and limited.

Average duration? few minutes. Lol. an hour for me.

one more weird bug :- ships joined together either on surface or underwater. I am like. Oh. once I forced them a part, flew the inhabitants of into the distance then into the water. Funny but weird hahaha

Dude can we contact each other on Skype or email? I have noticed this bug , well two bugs , not bad, its funny actually. the ships/ship once oxygen tanks exploded I think thats what they are, the ship flies through to uhe air, if it gets hit hard enough onto the serpents body...well the ship and the serpent are stuck together ahhahaha you can still swim but it slows you down and after like a minute, it either disappears, the ship/boar that is or it unattaches itself

The only bugs ive seen so far. I love this simulator game, its fun! I suggest new upgrades, once enough 'points' or 'score' you can press pause, go into 'upgrade' menu and choose whether you want to be longer in length obviously/faster/waterjet-blowing/

Oh giving us the option to ONE:- Customize the look of our Serpent

3 change the eye color of serpent

4. whether is should have a tongue or not

5. once you have reached a critical mass, should give us an option to ''multiply'' and allow 'ai' serpents to exist in game ,as babies, lol allow them to learn or do stupid rubbish to the humans, could lead them to extinction or...prosperity , make them somewhat dumb and intelligent ish... not sure if you can program it but ermm.. AI /NPC more should be added. AS FOR THE HUMANS

the humans, even though they're in water, they can still throw spears at you??

that doesnt seem right to me but makes it more challenging I guess. the humans , if in water, they should drown after some time and still be able to eat it

should allow more control over the mouth of the serpent press a certain key to open and close mouth whilst still automatically close when you're near a human(s) if that make sense, so I could bite the erm ship, cause damage or be able to bite into the ship and drag it under-water. making all inhabitants ..well vulnerable.

I have ideas but I dont have any clue how to program or anything, im just mainly good at thinking them up but when it comes to implement, meh ..

great game, I have a few hours of playability, so thats cool! I put it on my steam list as a non steam game people are like ''whats SSSS'' Im like ''WELLL.....SUPER.SEA,SERPENT, SIMULATOR''

Must play this!:'D I will rate this 5 stars for being so simple , easy to play and manages to capture your imagination. I love it. When you die , it will tell you who is the monster now for killing the last of the ancient Serpent species. I like that. Which made me think of ideas straight after the 'game over' type thing.

More can be added and this game simulator thingy has potential to be better, a lot better. still 5 stars but if updated 234567890 out of 200000000 or something, pretty decent , thought it were just gonna be a boring play but its quite funny.

However, please do give us an option to turn the repetitive music off whilst playing that is my grudge lol , for me it dont bother me too much but for others , it may just put you off.

I hope to see more from 'Cosmic Adventure Squad' I may do a lets play if my ideas are taken to account :P 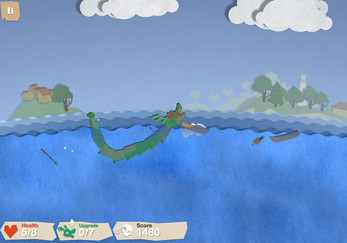 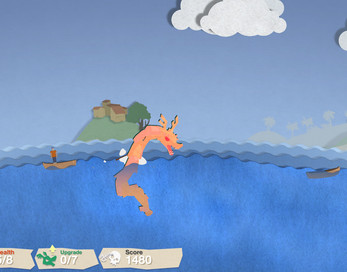